What is AB Testing

A/B testing is an effective method of optimizing web pages and improvising conversion rates. It is an effective practice of comparing two or more versions of a webpage to determine which one is performing better. The variants of the a/b testing campaign are then displayed to the users and the statistical analysis is used afterward to decide which variation is performing better for a specific conversion goal.

You can create an AB Test and edit the elements of a web page to optimize conversion rates with the help of an effective software tool.

NotifyVisitors enables you to create an AB test and further allows you to analyze the insights of the campaign such as the goal conversions, total visitors on your ab testing campaigns, etc. All in all, you can have a campaign overview as well as you can check out the metrics of each variation and determine whether you have achieved the specific goals or not.

AB testing analytics allow you to determine the optimized version of your campaigns. You can compare and analyze which version is performing better. Consequently, you send the best-optimized version to the audience to procure the determined goals such as better revenues.

Below are the steps to view the ab testing analytics in notifyvisitors dashboard :

Let us take a look at each of the categories to know the ANALYTICS better.

You can evaluate the overview of the campaign under this category. Know the total visitors, conversion, and conversion rates on your campaign as well as on each variation. Simultaneously you can view the insights about the goals you have determined for your campaigns. i.e. for the control as well the variations. Consequently, analyze the leading variation.

Define the variables of the SUMMARY :

First of all, define the time frame of the campaign for which you want to view the analytics.

How to define the variables of CAMPAIGN OVERVIEW :

How to define the variables of GOAL CONVERSION overview :

Here you can view the total number of visitors, conversions, conversion rate, and the improvement possibility for the LEADING VARIATION as well as for the least performing ones.

Note: The above definitions apply for evaluating the metrics of other goal conversions as well.

You can also view the campaign information to have a better understanding of the campaigns’ status, the age of the campaign( the time frame since its running, the segment ( the segmented visitors whom you showed the campaign), Page URL (on which your campaign is running). View the total number of visitors, total variations created, and the number of goal conversions. 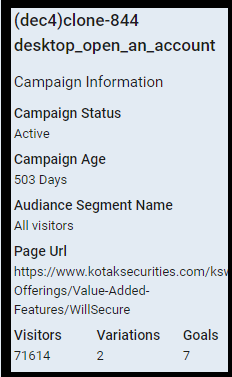 You can view here the following key metrics for your predetermined goal conversions for control as well as the variations individually :

How to define the variables of probability density functions :

View here the AB testing heatmap analytics for the control as well for the variations. The two powerful tools can help you optimize the conversion rates and see surprising results. With Heatmaps, you can analyze why a variation did not perform better.

Below are the metrics you can determine under this category :

Note: Define the time frame, the segment, and the baseline for the campaign for which you want to evaluate the analytics and determine the best-performing version.

Keep an eye on the ab testing analytics to view each and every aspect of your campaigns whether it is in terms of the total users, conversions, or simply the time spent on each variation. Every aspect matters in determining the best performing version to elevate your business growth.