What is campaign management and optimization?

Campaign management is a tedious task and optimizing them takes double the efforts. Why? You must be in sync with the interests of the audiences as to what appeals to them most.

It is inevitable for marketers to engage users with the best possible version of the campaign that can easily convert.

What are the ways to optimize the campaigns :

You can use the marketing automation tools (AB testing and multivariate testing) to optimize the campaigns and further send the campaigns to the audience.

How can you manage campaigns in NotifyVisitors :

NotifyVisitors enables you to create campaigns and optimize them through AB testing & multivariate testing. At the same time, you can optimize and send campaigns to the targeted audience.

Let’s have a look at how you can optimize the campaigns :

How to optimize your campaigns in NotifyVisitors dashboard :

How to optimize the campaign in NotifyVisitors dashboard through AB testing :

Follow the steps to know how to create ab test push campaigns in NotifyVisitors : 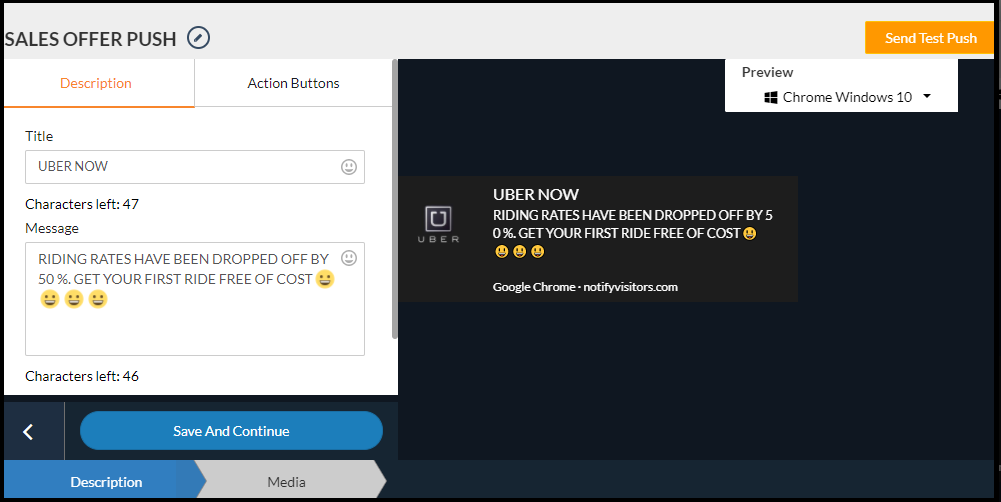 c. Click on the A/B Test Settings to A/B test your push campaign, divide the traffic into a 60-40 percent ratio.

Now here is a difference lies in the A/B or multi-variate Test and Split Delivery Test, here In A/B Test you have to send the control version and the variant in a determined ratio(as shown below). After determining the ratio, specify the waiting time. Once you get the results as to which one of the two wins, our system will send that winning variation to the remaining users.

How to determine the audience for your campaigns :

Let us see both the above insights in brief :

Run an AB test on the campaigns and send them to a segmented audience on the basis of their past behavior on your apps or website.

How to execute the process :

For example: Suppose you have created a push campaign and you want to optimize the campaign. Create three variants of it, variant A, variant B, and C with different combinations of elements. Say if your campaign reach is 3,00,000 users. Choose a test population for your variants to see how the audience reacts to them. Say it is 20 percent, we will be sending variant A to the 20,000 users and variant B to a different set of the 20,000 users and variant C to another set of 20,000 users. If the variant A  wins then we will automatically send the winning variation to the remaining 2,40,000 users.

When you are sending the campaigns to the live user segments, the user will receive the message immediately if the user qualifies the criteria you have determined. In other words, If you want to send the campaign to the users who make a purchase and the customer buys a product, the campaign will be sent immediately to him as they match your determined criteria.

For example - You want to send campaigns to the user while the user subscribes. As you cannot determine the amount of the users for your campaigns, you can make an assumption for the qualified audience and send the variants with a specific ratio. Say you have selected 1000 users as your test audience, now send variant A to the 500 users and variant B to another 500 users. You can determine the winning variation through clicks and send the winning variation to the rest of the users

The major difference between AB testing and Split testing is as follows:

In AB testing, you can add multiple variants of the campaigns and in split delivery, you have to determine the percentage of users for the variants such as delivering variant A to 40 percent of the users and variant B to 60 percent of users.

How to deliver the campaign :

Let’s understand the use case with an example :

Split delivery comes into handy when you want to send the campaigns to a subset of the target audience. On the contrary, if the no. of qualified users exceeds the specified number of campaigns, then unfortunately you cannot send.

Note: You can limit the number of users for a campaign per day and select the time-zone. i.e. user time-zone to schedule the campaign.

3. Email AB testing: The email AB testing feature allows you to compare different versions of your email campaign so that you can find the best one out of many.

How can you set up the email AB testing in the panel :

4. Multivariate testing: It may take various attempts to optimize the campaign by testing the multiple variations of a campaign. Also, varying the elements such as images, CTAs, banners, and much more somehow zeroes the effectiveness of the campaigns after so many attempts. In such a scenario, it's difficult to increase and enhance conversions. But NotifyVisitors simplifies your dilemma.

Now, You can easily determine a winner and target your audience in a much better way.

Let’s see how can you test multiple variations of the campaign in NotifyVisitors :

Just two steps and you are good to get started.

The variations are tested and the most effective/the winning variant is sent to the larger audience.

5. Variations of push, SMS, and other campaigns: When we talk about the campaigns for user engagement. We are usually referring to the push, SMS, Email, or WhatsApp journey.

You can create variations of the campaigns and test all the aspects of the variation such as the image, CTA buttons, links, and so on.

How to automate the process of testing and winning variation in NotifyVisitors Dashboard :

Let’s get acquainted with some of the key terms in the process :

How to send winning variation automatically :

How to send winning variations for different types of campaigns :

Configure the settings for one-time campaigns :

Configure the settings for recurring campaigns :

Configure the settings of journey campaigns :

Managing campaigns and optimizing them manually takes a lot of time. NotifyVisitors makes it easy and stable for you to manage different types of campaigns for your business growth.